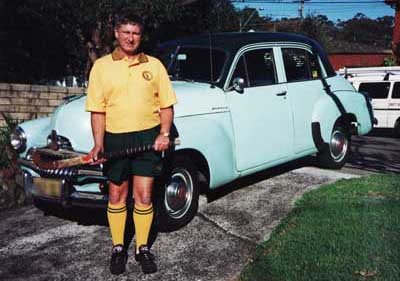 Ken is a country boy born and bred and proud of it. This is obvious whenever you get to have a chat with him. Ken, now a retired gentleman of Sydney’s Northern Beaches, has a story about his interest in Humpies which is intimately entwined around his life. His story reflects a little of country life in the 40’s and 50’s and is a slice of living history about the introduction of Holden’s to the country. Maybe it’s best to let Ken tell the tale in his own words…

“I was born in Crookwell in 1935, the first born of Linda and John Rodger, both from local families. My mother was one of 16 children, played hockey and tennis and was a very good cook. My father grew up on his father’s property at Roslyn, later moving to Narrawa North. I grew up on that property, Glenrock, at Narrawa North which is about 35 miles N-NW of Crookwell NSW. Glenrock was entirely devoted to the production of Merino wool. 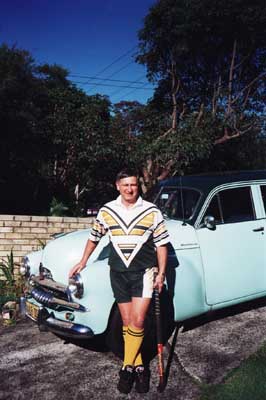 My schooling began when I was about 5 years of age. I would accompany my cousin, Audrey, and my teacher, Miss Hansaker, to the timber-slab one room school situated on an adjoining property about a mile or so thought the paddocks as the crow flies. At the appropriate age I was enrolled in Blackfriars Correspondence School. Eventually I was sent to Sydney at the start of 8th class to finish my education at St Francis Technical High School, Paddington. I thought this was a waste of time as I had already covered this part of my education by Correspondence, so after four months I rolled up the swag, emptied the billy and let the dog off the chain. In other words I tossed in school and headed back to the bush.

My love of Holden’s began with the release of Australia’s own car. I heard the adults talk about the coming release and the comments about how it would cope with the rough gravel roads, corrugations and stones as well as the many mainly American pre and post war cars did. I remember seeing the first 48-125 Holden sedan in the small showroom of Mackaness & Avery, the Buick/ Pontiac/ Oldsmobile/ Chevrolet/ Vauxhall and Bedford distributors. It was dark coloured; I couldn’t get a close look as the Manager only let potential clients into the showroom and others were crowded around outside. I thought it was black, but it could have been dark blue or deep grey. They had a cream one a few weeks later and by then everyone had their orders in and I was able to have a better look. I thought it was the most exciting car I had ever seen.

I was very patriotic and to me the Holden had to be the best – after all, it was Australian built for our roads and had to be better than the others. They only came to Crookwell in dribs and drabs. Due to long waiting lists, even local people with money had to buy new Vanguards, Austins, (A40, A70, and one lucky one, an A135 Sheerline) Morris Oxfords and Rileys or the occasional “black market” Ford, Chev, Ponty, Olds, or Buick. Dad had a 40 Ford V8 sedan, and despite my pleas, he said we couldn’t afford a new car.

On Friday, July 10, 1953, my prayers were answered when Dad bought a Holden! No, not new, but a second hand 1951 Caspian Blue Ute, only the second Holden in the Rodger clan. My great uncle Jack bought a new Holden Ute in 1952. We had the Ute for two years and I drove it every time a turn at the wheel was offered. It had a canopy so the family of 5 could be accommodated; three in the front with my little sister being nursed and my brother (or mostly both of us) in the back. From that time it was my aim to one day own a Humpy.

In October 1955, Dad bought his first new car, a surf green Holden FJ business sedan, and I drove it out of Mackaness & Avery’s showroom. What a huge thrill. Of course, the faithful Ute was traded in. I drove the FJ for just a short time. At the end of February 1956, I left Crookwell to try out for a job in Sydney. On March 2nd, I joined the NSW Fire Brigade. My dream of owning a Holden came in September 1957, when I bought my first car, a 1953 Holden Air Ride sedan, calvert blue with grey leather seats. I bought it from Arrow Motors in Double Bay and the salesman was A J Hyle (Alan).

My second Humpy was a 1955 FJ Ute, Dresden blue, grey seat and was purchased for 40 pounds ($80) on January 1966. It was bought to move out stuff (household goods) from a rental house in Wahroonga to our new home on Sydney’s Northern Beaches (by that time I was married). My then current car (a ’58 FC special) couldn’t carry fridges in the boot. The Ute was early ’55, Reg. ATE-268.

My third Humpy was another FJ Ute, late ’55, surf green. I bought the immaculate body from Mitchell Brothers Earthmoving at Brookvale for $50. It was complete from the firewall back, so I scrapped the blue Ute and transferred the front bits to the green Ute. I spray painted it, put in a Repco reconditioned motor, had the seat re-upholstered in original material and added all the extras I desired. Without doubt it was the nicest Humpy I’ve owned.

My fourth Humpy was one identical to Dad’s car, a surf green ’55 business sedan. It was a gift from a fireman mate, but I had no room to store it as I already had two EH specials as transport for Marg and me – a sedan and a station sedan, both wandana turquoise with fowlers ivory roof. In turn I gave the FJ away which was a totally stupid act.

I have regained some sanity and now have three Humpies which I hope to keep until I can no longer drive. They are then earmarked for my daughter and my two grandchildren.

I use the green FJ as much as I can, I enjoy driving it and I’m proud to own it. It had the usual starter motor kink of pretending the battery was flat if I stalled when the engine was hot, but Stan Bennett fixed this by replacing the original 2 brush starter motor with a 9 brush one and it works a treat. At the end of the Super petrol, I didn’t really trust Unleaded not to harm the motor so I fitted an on-line device that seems to work well, but I will take the risk with the other two Humpies and won’t change the engine set-up. I’ll trust ULP as Super. The Ute has the original motor and will be kept original, mechanically. The body and trim will have to be refurbished. Apart from my Humpies, my other interests (a very mild description of my feelings) are hockey, which I began to play at B grade level with Wheeo in the Crookwell competition and I have played Hockey without a break to the present day. I now play 5th & 6th grade for Manly. I’ve been very lucky to represent NSW in the Australian Veterans Championships (held annually) in ’86, ’91-06. I also represented Australia in international hockey in ’97, ‘98, ‘99 and 2001. It sounds pretty good and I’m extremely proud to have played for NSW and Australia but really I’m just an average player who had a lot of really good luck.

I also collect model cars, mainly Humpies, of course. Nearly all are 1:43 scale.

My final and most rewarding interest began with a chance conversation with the owners of Humpies on display in The Rocks at an early NRMA Motor fest. I’m not sure of the date but I didn’t have my FJ there so it certainly was not finished or registered. The love of AOC (Australia’s Own Car) prompted me to have a chat. One of the owners, Athol Hodgeson, invited me to visit one of their meetings where I could meet other fanatics. The friendship of the Humpy owners was amazing. I kept the name and phone number and eventually joined the club. They were the best group of car enthusiasts I’d ever met and their help with any problems I had with my FJ was given unconditionally. The club events over the years that I have attended have only reinforced my appreciation of their friendship, humour and dedication to the preservation of our Humpies.”

So there you have it, one small slice of Humpy history and a large slice of one persons enthusiasm for Australia’s Own Car.