Holdens are in your blood.

In 1958 my father bought a three-year old FJ Special from a farmer at Narrogin in WA. Coming from his A40, A30s and Vauxhall Wyverns, the Holden was Dad’s first “proper car”. Compared with the others, the Holden was a huge advance in interior space, comfort, power and reliability. It became the family workhorse for the next 13 years. Its blooding was as field transport for a thesis in geology around Geraldton.

In 1960, Dad was accepted for a PhD at the University of New England, and my parents drove the FJ over to Armidale from Perth. Back then the sealed road stopped at Coolgardie and started again at Iron Knob. In 1961 my parents did a return trip to Perth with my then eight-month-old brother (and again in 1964, this time with me). The constant pounding over the miles of rough roads took their toll on the car: a big pothole would bend the front wheel rims enough to hit the upper control arm outer pivots, and over time the steering knuckle supports slowly bent and would need straightening in a press. The front crossmember broke its mounts and had to be welded up in SA. In Broken Hill the subframe came adrift and needed more welding, but in the process the front seat caught alight… and even with a seat cover Mum could never drive the FJ afterwards without laddering stockings. 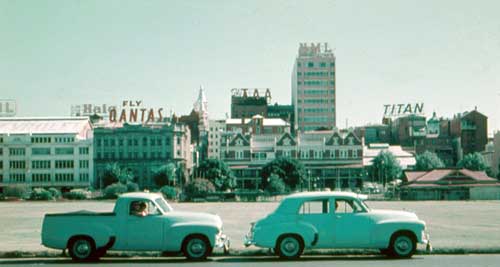 Then there was the time when the steering drag-link came apart coming down off the New England Plateau. Dad luckily kept the car on the road, and stopped it; but had to walk back up the road to find the cups, plugs and springs to put the steering back together. Yet all this was the normal lot of owning a car in the early ‘60s.

Time passed, and I remembered the FJ as “the old car” (we’d just got a second-hand EK as “the new car”), and as it passed 150,000 miles it developed some more character. It used to drop out of second gear, and the driver’s door would spring open on occasions if you went around a left-hand corner. If you took the left-hand corner around 20 mph you had to decide if you wanted to steer, stay in gear or keep the door shut.

Of course the inevitable happened. Dad bought an HR wagon in 1971. I would dearly love to have kept the FJ and fixed it, but as a nine-year-old your options are limited, and it wasn’t practical to park the FJ up the back yard for another eight years. Dad sold it to a squash buddy for $20.

After high school I inherited the family EK. In ’82 it needed an engine rebuild, and we took the block around to Glasscock and Kitchen’s at Lindfield in search of a harmonic balancer puller. They had the puller; but sitting up the back of the garage along with the Tiger Moth propeller was a black 48 series. Dad asked the mechanics about it. One owner, now deceased, 39000 miles, yes, it’s for sale. The EK got its rings and bearings, and the family got yet another car, for the then-huge sum of $3200. The 48 was a bit tired, but straight and complete. A good project for restoration . . . some time. And it sat up the back of the garage for another 22 years. Because the First Rule of Restorations says, “never start until you know you’re going to finish.”

At the end of 2004 the right time came to restore the 48. I took a month off work and Dad and I stripped the 48 down to a shell and started the rebuild. This is where Dad’s FJ experience helped. More than once I got stumped about how to pull things apart, but Dad would say, “I remember there’s a trick to this . . . (click) . . . there.” We fixed some rust, straightened a couple of dents out and repainted the car. We replaced the wiring and headlining and refitted the windscreens. Then there were some things we couldn’t do ourselves. We had the interior re-trimmed in leather, and had a lot of the chrome re-plated. The mechanicals needed some work: reconditioned shock absorbers, new brake hydraulics, a radiator, a clutch, a new axle shaft, piston rings, and a cylinder head overhaul. By mid ’05 the car was registered and back on the road for the first time in 26 years. I “went modern” on some safety issues though: front seatbelts, indicators, and radial tyres. I kept the six-volt electricals intact, but changed to quartz-halogen headlights. The car still has its vacuum wipers. The 48 is now effectively my “regular drive”.

The final touch was to fix up the old Ferris car radio that the FJ had (we kept the radio when we sold the car) and install it in the 48.

At the end of 2006 I took some long-service leave, and my father and I drove the 48 to WA and back. Seven and a half thousand miles in all, and that’s another whole story.

After getting the car back on the road, my father and I both joined the Owners’ Club, and it’s been really valuable getting to know other old Holden owners. There is no Holden problem that the others do not know about, and it’s great getting to know and share experiences with the other club members too.