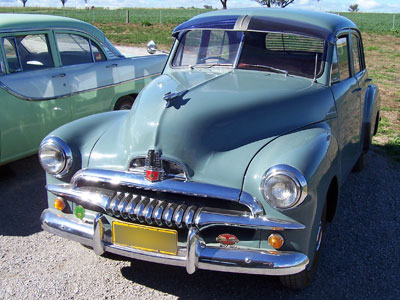 If you asked Ian what was the genesis of his interest in Holdens, he could truthfully say that it was predestined even before he was a glint in his father’s eye!

His Father then purchased a 1955 FJ Sedan, registered AVL-839. Three years of happy motoring later, he traded it on a new 1958 FE sedan, registered BKS-301. These vehicles were a radical change from the first Holdens, being much more refined and with a much higher level of comfort.

Mr Mason Snr kept this car for seven years, when he, in turn, traded it on a new 1965 HD sedan registered DXD-736. Once again the HD’s were a radical design and a departure from the famous EH of 1964. The HDs were very stylish and featured a finned front mudguard. Unfortunately the HD’s weren’t readily accepted amongst the motoring population and weren’t deemed to be a popular Holden at the time, and over the years rapidly disappeared. By a quirk of Holden collectors fate, these vehicles have now become quite collectable by virtue of their relative scarcity.

By this time Ian had arrived in the Mason household, and the HD was one of his earliest recollections of the Holdens he would later come to like and enjoy. Mr Mason Snr kept the HD until 1973 when he switched to a Valiant sedan. 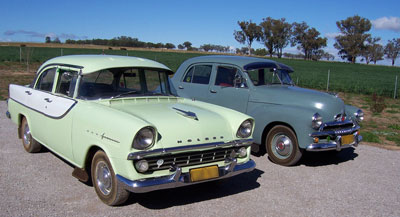 Ian retained a soft spot for Holdens throughout his youth and early working life, although he had to drive an XD Falcon during that time, which he disliked. Ian still dislikes Fords to this day.

It’s funny how the brand of a vehicle polarises enthusiasts into liking or disliking a car and Ian is no exception.

Ian’s mind constantly drifted back to his family’s history of owning Holdens, and in 1998 he had the opportunity of purchasing his 1956 FJ Standard sedan. At the time a member of the ‘48 & FJ Holden Owners Club’, John Fielding who lived in Sydney’s North West suburbs, owned the car. John had the full history of the car. It was purchased originally in Sydney and was mostly a Sydney car. In 1981, the original owner died and his daughter, who lived in Raymond Terrace NSW, sold it to a mechanic who was well known in the Old Holden circles and is now located in Temora NSW. He sold the car to John Fielding, and Ian purchased it from him.

The FJ was in very good condition when Ian purchased it and he has only had to do some minor cosmetic repairs over the years.

At the time of purchasing the FJ in 1998, John Fielding introduced Ian to the ’48 & FJ Holden Owners Club of NSW’. What appealed to Ian about the Club was that it catered only to Unmodified ‘48s and FJs, and the members were dedicated to the marque. Ian said he hates to see these lovely old veterans butchered and lowered and accessorised with non-original parts.

Ian currently lives in the Northern Tablelands of NSW and, with work commitments finds it difficult to attend meetings and runs, but tries to get along as often as possible. He has made the journey to All Holden Day in August for the last few years.

Ian said that although he doesn’t see his fellow members very often, he knows he only has to pick up the phone to get a cheery voice that is very willing to talk about anything including Holdens. When he does catch up, the members greet him as a long lost brother!

FB Holdens also hold Ian’s attention. In 2003 he again had an opportunity to purchase a 1961 FB Special sedan from a fellow in Terry Hills NSW. This fellow had purchased the car from the original owner’s son. The car had spent its first thirty years in and around Tumut NSW. Once again the FB was in very original condition and only required the usual cosmetic repairs to make it look the way it does today.

Besides being one eyed about Holdens, Ian’s major hobby is collecting Early Holden literature and brochures, covering all Holdens up to the HR model. He has amassed a huge collection over the past ten years.

In addition to being a member of our club, Ian also belongs to the FB-EK Car Club of NSW and was a founding member of the Tamworth Classic Holden Club. These days he and a few mates tend to get their valued vehicles out occasionally for an informal run in the country.

Together with a partner, Ian has been able to turn his interest into a small business, hiring his vehicles, and two Austin Princesses (a 1955 and the other a 1957 Model) for formal occasions, including weddings, under the banner of Klassikkars.

This could be just the thing for someone living in Ian’s region and looking for a different form of transport for his or her formal occasion. Ian’s Website is www.klassikkars.com